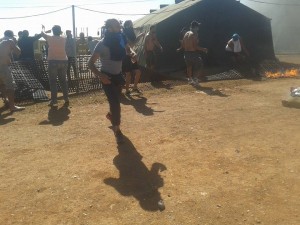 On Friday, 6th of November 2015, a KISA delegation visited and talked to the refugees in the British base of Dhekelia. Unfortunately, the conclusions of the visit have been confirmed by several reports that have so far seen the light of publicity referring to significant violations of the rights of refugees[i]. It is reminded that the refugees arrived at the British Base (SBA) of Akrotiri on Wednesday 21st of October 2015 after a rescue operation while a week later they were transferred to the Base of Dhekelia.

In the first place, KISA, Action for Equality, Support, Anti-racism considers that the restriction of circulation of the refugees within the fenced area of the Base of Dhekelia is unacceptable. The peculiarity of the entire situation can be proved by the fact that the officials of the Base reject the allegations that the refugees are kept in custody while at the same time they obstruct their free circulation.

At the same time, we consider that the improvement of the living conditions of the refugees is crucial, particularly for the most vulnerable groups such as children for whom there should be an immediate concern for their attendance at schools. Problems are also created by the fact that two or more families of refugees are staying in each tent which results in the lack of privacy and personal time and space especially for women. Clearly, the expected deterioration in the weather conditions will contribute to the increase of the difficulties that the people living in the camps are already facing. This situation makes it even urgent to take measures in order to improve their living conditions.

In addition, poor objective and diverse information given to the refugees has created a further confusion and has intensified the feeling of uncertainty among them. We believe that the need of an independent consultancy and information to the refugees in the presence of translators is of an extreme importance that the authorities of the Base must arrange immediately.

Many questions and further concerns are raised by a letter that was delivered to the refugees by the authorities of the Bases on Saturday, 7th of November 2015, which motivates the refugees to apply for asylum in the Republic of Cyprus on the basis of the “Memorandum of Understanding” (MoU) of 2003 between the SBA and the Cypriot authorities[ii]. Otherwise, it has been communicated to them the intention of the authorities to initiate the proceedings for their deportation to Lebanon. We consider that the blackmailing dilemma that the refugees are facing during the most difficult period of their lives is unacceptable and morally reprehensible since refugees are being threatened to be sent back to areas which they fled from in order to save their lives. The conviction that this letter is intended to blackmail refugees is supported by the fact that Lebanon, according to recent actions, refuses to consent for the return of refugees in the country[iii].

At the same time, the attitude of the authorities of the Republic of Cyprus is further complicating the existing situation. A typical example is the recent statement of the Minister of Justice and Public Order that the refugees will be accepted on the territory controlled by the Republic after submitting certificates of good character.

In light of the above, KISA – Action for Equality, Support, Anti-racism calls on:

[iii] See relevant video from the refugees in the Bases: https://goo.gl/wrZ7vQ