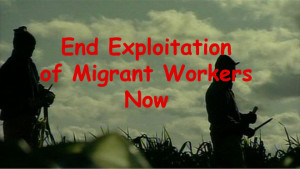 In recent days, uproar has broken out on social media in relation to the unacceptable terms of employment referred to in a job advertisement under which the worker was required to carry out a “series of tasks such as weeding, watering, planting, pruning and general cleaning, on a full time schedule, including holidays and Sundays on a salary no higher than 480 Euros”. The intense social reaction, has led, among others, to the decision by the Minister of Labour, Welfare and Social Insurance to carry out an investigation of the matter on the spot.

In light of the incident in question, KISA considers it as important to emphasise that the specific job vacancy has not just appeared out of nowhere, but it essentially operates within the bounds of the collective agreement  (11/02/14) concerning migrant workers in the agriculture and animal farming sector, which was in fact promoted by the Ministry of Labour, Welfare and Social Insurance. The Convention in question, which has been signed by the government, the agricultural organisations and the trade unions, essentially sought to serve Cypriot employers, sacrificing at the same time the workers’ rights in the agriculture sector, whose crushing majority is migrant workers.

The said collective agreement essentially institutionalises a ‘contemporary slavery’ regime for the workers in the sector, since the gross salary for a 6-day working period is set to 455 Euros.  Furthermore, there is a compulsory cut from the workers’ salary that goes towards the social insurance fund which nevertheless provides no real benefit for the workers themselves, while at the same time have no access to the public health system. Similarly, the agreement illegally forces the workers to become members of one of the trade unions while it requires the employer to cut away a portion of the workers’ salary so as to deposit that money for membership to the trade unions.  It must be noted that in most cases the workers have no contact with the trade union, of which they are forced to become members.

Despite the unacceptable terms of employment provided for the workers in the agriculture and animal farming sector , many of them are forced to work in appalling working conditions and much over 80 hours per fortnight, including Sundays as well as public holidays. Particularly, the facts that the migrant workers are under temporary residence permit, have limited possibilities to change their employer, usually reside at the workplace in combination with the inadequate workplace inspections by the relevant officials, lead to blatant violations of their rights and cultivate the conditions for trafficking in human beings.

KISA has repeatedly condemned the unacceptable terms of employment within the agreement. Despite that, neither the relevant authorities nor the state in general have reacted, a fact that raises more concerns since, as it appears, the current outcry stems primarily from the belief that the aforementioned job vacancy  was referring to Cypriot workers.

We consider that the problem cannot be solved by carrying out an isolated investigation on behalf of the Ministry of Labour, but by demonstrating political will and decisiveness for the termination of the overexploitation of migrant workers. Within this framework, we call upon the Ministry of Labour and the government in general, which prior to its election had committed to carrying out a dialogue with the civil society and which unfortunately has not done to this day, to immediately initiate a consultation process with the relevant stakeholders, including the workers themselves as well as the NGOs who deal with issues relating to migrants, with the aim to tackle the overexploitation of migrants.

At the same time, we call upon the Ministry of Labour to initiate a renegotiating process in relation to the collective agreement in the agricultural and animal farming sector , so as to be in line with national and international labour law, based on the principle of equality of all workers, despite of their nationality and residency status.