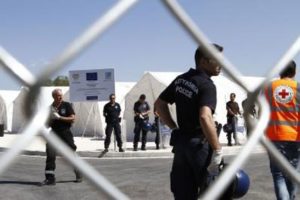 KISA’s representatives visited “Pournara” temporary emergency camp for refugees in Kokkinotrimithia, in order to meet with the newly arrived refugees and to inform them in regards to their rights. KISA expresses its satisfaction about the fact that all refugees are well and about the positive treatment, as they themselves claim, have received from the police as well as the prompt and unhindered access of refugees to independent contribution and information by NGO’s according to Directives 2013/32/EU[i] and 2013/33/EU[ii]. At the same time however, concerns arise in regards to the functioning of “Pournara” as well as the practice of criminalization of a number of refugees from each group that arrives in Cyprus.

Currently at the “Pournara” camp there are refugees who have recently arrived by boat at the Akamas Peninsula, as well as refugees who presented themselves at the police station Omorfitas to apply for asylum, after having passed from territory controlled by the Cyprus Republic through Sopaz. During our visit to the Centre, apart from all the above, it was also found that all refugees are subject to deprivation of their liberty. In addition to this , it was also found that individuals who cannot be considered as “”rescued” such as those who entered the area controlled by the Cyprus Republic through Sopaz, have been transferred at the camp.

Initially, we emphasise that Pournara’s nature must be clarified as well as the legal framework that governs it. If indeed this camp functions as a place that covers the basic needs of primary reception of refugees, rather than as a rescue centre, then the unhindered access of asylum seekers to their rights must be safeguarded, including their freedom of movement. It is worth mentioning that, according to the legislation, asylum seekers are either transferred to the Reception Centre in Kofinou or are immediately provided with the necessary material support by the Social Welfare Services.

Futhermore, KISA strongly condemns the fact that the government continues to criminalise refugees. Specifically, two individuals from the group that arrived at Akamas have been accused by the police for illegal entry to the country while a third person has been detained pending investigation for serious offences in relation to the smuggling of human beings. The criminalization of refugees based on the excuse that in the past they had been deported from Cyprus as irregular migrants, not only does it violate refugee law, but is also contrary to the recent decision by the District Court of Ammochostos, according to which an Iranian refugee facing similar charges was acquitted[iii].

Even worst, the third person in question is accused by the police for navigating the refugee’s boat towards land after the actual smugglers abandoned them at sea. In fact, on the boat were his wife and their four children who are now at the “Pournara” camp. Having this, as well as other similar incidents[iv] in mind, KISA considers that the authorities implement an unacceptable practice which aims to scare refugees, who in critical moments take on the role or rescuing the rest.

In light of all of the above, KISA asks:

[i] Please see the Directive at: http://goo.gl/LRvPsW