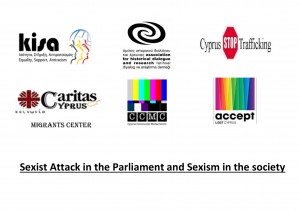 The recent sexist attack by MP Andreas Kyprianou against MP Irini Charalampidou in the House of Representatives highlights the need to take immediate and drastic  measures for combating all forms of sexism. The specific attack is by no means an isolated incident, as recently there have been repeated and publically expressed sexist views, speech and behavior by male members of parliament.

Routinely and not at all by chance, these are the same MPs that show no hesitation when it comes to avoiding their legal obligations (such as payment of fines, etc.) or to contravene the law by using their parliamentary immunity as a shield to promote unacceptable positions and acts, considering themselves to be above the law. They are also the same MPs that usually express racist views in Parliament or/and publically. Specifically, we recall the public statements of Andreas Kyprianou in 2011, when as a candidate in the mayoral elections and talking about the small port of Limassol, which he described as “a place for the family man, the Limassonian and the tourist”, he demanded the exclusion of migrants and called for the policing of the area for this purpose. In his statements he targeted migrant women, whom he identified as prostitutes. It is also the same MPs that insist on preventing the voting of the civil partnership law and use homophobic speech. It is more than apparent that sexism, homophobia and racism are part of the political identity of these specific political figures.

This time, Andreas Kyprianou’s sexism was not limited to speech but was also expressed in acts, which tantamount to sexual harassment. More specifically, on Friday 26/06/2015, Andreas Kyprianou tried to place his mobile phone and while this was probably on ‘capture a picture’ mode, under the skirt of female MP Irini Charalambidou. When she reacted, he swore at her calling her among others “a slut”.  Subsequently, he proceeded with the well known tactic of victim blaming, saying that he previously thought that his colleague had tried to take a photo of him while he was smoking illegally in a meeting room in Parliament.

The victim-blaming tactic is used by almost all perpetrators of gender-based violence. It is a fact that the specific sexist attack reflects the difficulties that every woman faces when experiencing gender-based violence. Characteristic of this is the position of the President of the House of Representatives that “what happened [in Parliament] should not have been a subject of complaint to the Police” and he “urged for a process for explanations”.  As in every case of gender-based violence, the woman subjected to violence is urged to be silent about it and not to report it, addressing this violence not as an expression of sexism, but as a “family matter”. In this instance, Parliament takes the role of the family with its leader trying to keep the matter private and within the “family”.

And while the issue has already been publicized and denounced, the majority of the political parties, including that of the perpetrator, keep silent and some have made wishy-washy mild statements that denounce “the facts” without naming them, which shows the denial of its gender-based and sexist dimension. The way in which a large section of the media has presented this sexist attack is also noteworthy. We read about “fight between deputies” and “incident”, in which the perpetrator and the victim are equalized as “protagonists”. The silencing of the gender-based and sexist dimension of violence is also a routine practice of the media that aim to erase this dimension.

In the light of the above, we call on: