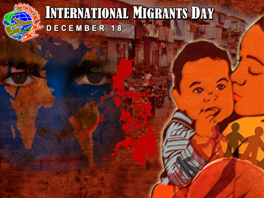 On the 18th of December, 1990 the General Assembly of the United Nations adopted the “International Convention on the Protection of the Rights of All Migrant Workers and Members of Their Families.”[i] Eleven years later, after a UN initiative, December 18th was formally introduced as the International Migrants Day.

Despite the efforts of the international organization to ensure decent living conditions for migrants, the reality is that today the majority of migrants is still subject to exploitation, discrimination and violence. Migrants, starting from their transition to the country of destination are confronted with traffickers and are subject to all sorts of inhuman behavior. Unfortunately, exploitation, unequal treatment in the workplace, xenophobic violence, denial of access to basic services and the violation of their human rights constitute the brutal reality that migrants largely encounter in their destination countries.

Amid the worst refugee crisis since World War ΙΙ, the separation between refugees and migrants, is a matter of particular importance, given that many times it serves as a pretext for further restricting the rights of migrants. Indeed, the separation between refugees and migrants is promoted by many governments, far-right and neo-Nazi formations but also by a large number of the media, with the immediate goal of  creating the figure of the “evil” migrant who tries to invade our societies and therefore, needs similar treatment and, by extension, the maintenance and further strengthening of Fortress Europe.

Cyprus has failed miserably in ensuring the labor and human rights of migrants living in the country. Its persistence on maintaining a highly unjust and outdated migration model adopted in the 1990s – which treats migration as a temporary phenomenon and migrants as cheap labor that Cypriot economy and society can use as slaves at will – has created the conditions for overexploitation, blatant violations of their rights, institutional and social discrimination and the exclusion of migrants living in Cyprus. This migration model, that is more similar to those adopted by the countries of the Middle East, establishes the absolute dependence of migrants on their employers, most of the times under conditions of extreme exploitation and often under those of modern-day slavery, which result in harboring, among others, human trafficking.

Additionally, in recent years, and especially after the outbreak of the economic crisis, instead of treating migrants as one of the most vulnerable groups of the population that the state ought to support, they have been converted into scapegoats by some political parties and extreme right parliamentarians for all the ills of the economy and society. The presence of the migrant population  is deliberately presented – used as a factor, which led to the problems of the economy such as the high rates of unemployment and the “bankrupt” state funds, resulting in maintaining and strengthening the environment in which racism, xenophobia and discrimination is enhanced and promoted against them.

On the International Migrants Day, KISA calls on the Republic of Cyprus to:

In addition, we call on the European Union:

[i] For the convention see: http://goo.gl/f0ecvg