International Day against Racism and the Agreement of Shame 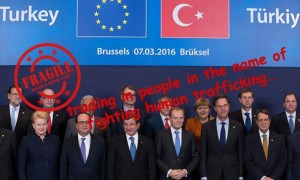 On the occasion of the International Day for the Elimination of All Forms of Racial Discrimination,  as well as in light of the agreement  between EU – Turkey, KISA highlights the rise of discrimination, racism, chauvinism and intolerance during the last few months in Europe, including Cyprus. An indication of the influence exerted by neo-nazi, nationalistic and populist circles is the recent closure of their borders by many European states so as to prevent access to the refugees.

At the same time, we raise the alarm and warn that any political compromises of the EU in matters of safeguarding and protection of human rights, so as to satisfy the far-right and conservative audience, will undoubtedly lead to a new upsurge of racism and racial violence against refugees and migrants, as well as to a policy targeting everyone who adheres to the protection of human rights and the European rule of law.

KISA is totally opposed to the agreement between EU and Turkey, as it constitutes the capstone of a methodical attempt by the far-right and intolerant movements to set up the political agenda in relation to the refugee situation at the national as well as the EU level. The far-right has in fact succeeded, to a large extent, in shifting the climate of solidarity with refugees so evident in the last few years in the European societies, by spreading false information and cultivating an intense climate of suspicion against refugees and migrants.

The aforementioned EU – Turkey agreement is nothing less than the transformation of the influence exerted by the far-right and neo-fascist circles across Europe on EU policies. Policies that go against the fundamental principles and values of the EU, violate the rule of law, fuel the far-right arguments and will eventually prove to be destructive to the very foundations of the European project. At the same time, as KISA’s Executive Director stated at the day before yesterday’s Parliamentary Committee’s session on combating racism and discrimination, the EU’s current position essentially constitutes  a negation of the responsibilities and consequences of its direct and indirect involvement in the countries of origin of the refugees, which has largely contributed to the development and maintaining  the circumstances that have led to the violent displacement of millions of people.

As far as Cyprus is concerned, the basis of the institutional prejudice and racism stems primarily from the migration model in place and which views migrants in the country as second-class citizens. At the same time, politicians and other public figures and stakeholders, with equally destructive, populist, xenophobic and racist rhetoric and positions, have for years been trying to cultivate the image that migrants and refugees in Cyprus threaten  social cohesion and are responsible for all economic and other problems of the last years. As in Europe, these policies and rhetoric enforce and propel the enhancement and rise of  the far-right, fascist and neo-nazi parties and movements such as ELAM, which are openly and blatantly against migrants and refugees.

An equal share of the responsibility for tolerating racism and discrimination belongs  to a large section  of the mass media, which easily and uncritically publish news and positions which infect society. Such an example is the recent broadcast of the CYBC’s (RIK) show «Tête-à-tête», during which singer N. Sfakianakis has, among other racist and intolerant comments, referred to the refugees as ‘illegal migrants and cowards who rape Greece” .

In light of all of the above, KISA calls on the Cypriot government and state in general to: