Important conviction and fine for CYBC for xenophobic and racist statements 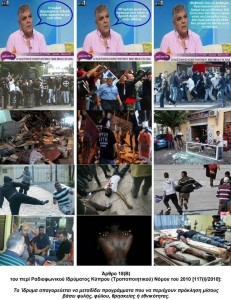 KISA – Action for Equality, Support, Antiracism expresses its satisfaction with the decisions of the Cyprus Media Complaints Commission and the Cyprus Radiotelevision Authority, and particularly notes the fine of €3000, that was imposed on the Cyprus Broadcasting Corporation (CyBC), due to instigation of xenophobia and racist hate through the television broadcast of the xenophobic and racist statements by actor Kostakis Konstantinou.

Specifically, Kostakis Konstantinou, as a guest on the show “Together on CyBC” of Elita Michaelidou on Wednesday, 19 June 2013, declared among other things: “Too much democracy is an illness for a place; too much democracy is an illness […]. I like this thing that Golden Dawn is doing in Athens now. […] We saw you are afraid to walk in Saint Panteleimon. […] When I walk down the street and am being watched by 800 foreigners who have done I don’t know what in their country, I am not racist, but I can’t watch that. I can’t watch you commit a crime, be my guest, let me feed you and give you water, and give you the cheques as well and you just not respecting me, because I am respectful too when I go to your country Mr. Pakistani and Mr. Indian and whatever, I am respectful because I am in your country.”

On June 27 2013, KISA reported the broadcast and CyBC for these unacceptable statements to the Cyprus Media Complaints Commission, to the Cyprus Radiotelevision Authority, to the Anti-Discrimination Body of the Ombudswoman’s office, as well as the Attorney General. The complaint involved the breach of the Journalists’ Code of Practice, of the Cyprus Broadcasting (Amending) Law of 2010 [117(I)/2010], of the Law regarding Fighting Certain Types of Displays of Racism and Xenophobia through Criminal Justice of 2011 [Ν. 134(Ι)/2011] and of the Equal Treatment (Racial or Ethnic Origin) Law of 2004 [59(I)/2004]. The response of the relevant authorities was positive. The Anti-Discrimination Body informed KISA they were investigating the claim, while we once again welcome the attitude and the corresponding decisions by the Cyprus Media Complaints Commission and the Cyprus Radiotelevision Authority. However, the Attorney General judged it is not within his jurisdiction to investigate the case and referred us to the Chief of Cyprus Police.

On 6 October 2013, the Cyprus Media Complaints Commission examined the claim by KISA and decided that the content of the broadcast constitutes a breach of the conditions of the Journalists’ Code of Practice. According to the ruling of the Commission, “broadcasting the reference made by Mr. Konstantinou that “too much democracy is an illness” is contrary to the general provision of the Journalists’ Code of Practice concerning respect and promotion of democracy and other universal human values. Firstly, there can be no quota on democracy. There is only democracy as a universal human value and it is not possible for anyone to suggest restricting it when they personally and spontaneously conclude there is too much democracy. After all, characterising democracy as an illness refers to a situation that must be dealt with immediately, and in the aforementioned case with the means and methods used by Golden Dawn, an organisation with publicly declared fascist and anti-democratic opinions.” At the same time, the Commission found that “the remarks made by Mr. Konstantinou about being afraid to walk in the streets of Athens because he was being observed by eight hundred foreigners who he doesn’t know the actions of in their country, in the manner they were expressed, carry a heavy xenophobic character and as such it is possible to arouse suspicion, hate and contempt towards any foreigner. As such, it has been judged they are contrary to the provision regarding avoiding remarks that contain elements of prejudices due to race, colour, language, religion and ethnic origin.” Finally, the Commission distinguishes that “this decision is not about Mr. Konstantinou upon whom we have no jurisdiction, although we intensely disapprove of his statements, but rather about CyBC and the host of the broadcast, since they enabled his xenophobic opinions to be heard and did not take care to distinguish their position from them clearly and unequivocally.”

On 11 September 2013, the Cyprus Radiotelevision Authority published its initial decision and concluded that the particular programme “contained instigation of hate based on race, religion or ethnicity, in breach of article 18(B) of the Cyprus Broadcasting Corporation (Amending) Lwa of 2010 [117(I)/2010].” In its initial ruling, the Authority mentioned that “the claim that the Corporation had no intent or purpose to display racist or xenophobic remarks and that the result of the broadcast could not be planned as it was live and not pre-recorded, the Authority notes that the Corporation still carries the responsibility for any programme it transmits, regardless of whether it is live or pre-recorded.” Additionally, “to the claim that the guest clearly expressed his personal views, without that meaning that they are adopted by the journalist or the CyBC, the Authority agrees that the opinions of any guest are not adopted by the Corporation or any journalist. However, this alone does not provide a defence as the Corporation provides the platform through which any views are transmitted and even more particularly in this case when the views of the guest deliberated on issues of racism and xenophobia, the Authority expected the Corporation would be especially careful.”

On 16 October 2013, the Cyprus Radiotelevision Authority published its final ruling and concluded that “in the present case there is a breach of article 18(B) of the Cyprus Broadcasting Corporation (Amending) Law of 2010 [117(I)/2010]”, according to which “the Corporation is not permitted to transmit programmes containing instigation of hate based on race, gender, religion or ethnicity”. Also, the Authority mentions that “according to the provisions of article 3(2)(j), it had given the Corporation the right to be heard and could have proceeded with the imposition of sanctions, at its judgement. Even so and in the light of the circumstances of the case, the Authority gave the Corporation the chance to be heard after the detection of the violation of the purposes of imposing sanctions.”

Specifically, the Authority, with a letter dated 25 September 2013, called the Corporation, if it desires, to submit its view in writing for a second time. CyBC responded to the Authority through a letter by the General Director on the 7 October 2013. Regarding the claims and view of the General Director of CyBC, as they are portrayed in the aforementioned letter, in its final decision the Authority observes that “in the claim that mentions that CyBC has an obligation to cover through radio and television the entire spectrum of opinions, something that is attached to the provision regarding free speech for its guests, regardless of their capacity and regardless to the opinions they express, in accordance with the exceptions defined by the law, the Authority agrees and underlines that, in the particular case, the guest through what he said and by extension the CyBC, have clearly violated the legislation, since it resulted in broadcast of remarks that contain instigation of hate based on race, gender, religion, or ethnicity. Furthermore, the Authority believes that, as the Corporation has an obligation to cover and portray the entire spectrum of opinions; it is similarly responsible for whatever it broadcasts that breaches the provisions of the legislation.” At the same time, “in response to the claim that the Authority should examine whether its decision in the particular case constitutes a breach of the right to free speech and information of the guests of CyBC as well as the Corporation itself, the Authority believes that from the moment the guest’s opinions deliberated over such a serious issue as racism and xenophobia, that were also expressed in a way that makes it possible they reinforced the hatred against the different, then what was broadcast did not constitute freedom of expression but a clear breach of the legislation, especially if we consider that the journalist did not react in the least to what was said.” In light of the above, the Cyprus Radiotelevision Authority decided to impose the administrative fine of €3000 on the Corporation for the breach of article 18(B) of the Cyprus Broadcasting Corporation (Amending) Law of 2010 [117(I)/2010].

KISA welcomes the decisions of the two independent authorities while at the same time waiting for the results of the investigation being conducted by the Authority against Racism and Discrimination. Furthermore, KISA hopes that the specific decision will become a milestone in the attempt to fight and eradicate xenophobia, intolerance and racism from public speech, as it is shaped by the mass media, including public radiotelevision and the role that it should be playing. KISA also notes that it agrees completely with the stance expressed by the General Director of CyBC regarding the promotion of pluralism and portrayal of all opinions, through the provision of a forum of free expression to its guests. However, as is widely accepted in all democratic society, freedom of expression stops at the point that universal human values, ideals and basic human rights are violated, and discriminations, racism, nationalism, and nazism are promoted, discriminations responsible for the greatest bloodshed in human history.

Finally, KISA considers that CyBC’s opinion for promotion of pluralism and hosting different opinions, which we agree with completely, doesn’t have a substantial reflection in action. Especially in the last few years, CyBC has been ignoring and systematically refuses to host or even highlight the stance and opinions of non-governmental organisations and of the community of citizens who are active in the areas of migration, asylum and fighting discrimination, xenophobia, racism, and human trafficking.