From ex Minister, to a convict and now an “agent”? 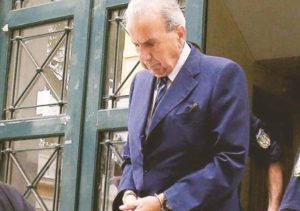 KISA has in the past repeatedly reported the direct and indirect involvement of members of the Aliens and Immigration Unit and of the Civil Registry and Migration Department in relation to exploitation rings against migrants and refugees. However, KISA never imagined that one day it would witness the involvement of an ex interior minister of Cyprus, Mr. Dinos Michailides in this role.

KISA became aware of the incident during the handling of a case involving mistreatment of a migrant (V.T) by his employer. It is being reminded that in 2014 Mr Michailides has been sentenced by the Greek justice system to 15 years in prison for bribery in a case related to the purchase of armament systems,  but has been released about a year ago on the basis of his advanced age and health reasons. [1]

More specifically, Mr V.T arrived in Cyprus 6 months ago through a non-licensed “agent” to whom he paid the amount of 5,500 dollars. Immediately following his arrival in Cyprus he was transferred by the “agent” to an employer in the agricultural/farming sector. At the same time however, Mr. V.T performed tasks in the construction and winery operations for the same employer. During his employment to the said employer, Mr. V.T was working daily for 13-14 hours with a 20-minute break, while his salary was 400 euro per month. The violent incident took place during the fifth month of Mr. V.T’s employment, when his employer hit him on the head with a brick because after six hours of continuous work the migrant worker expressed that he was feeling exhausted and asked for a break so he could eat.

This resulted in Mr. V.T falling unconscious on the floor.  When Mr. V.T regained consciousness was transferred by other workers to a shade and a later on to his place of residence. Due to the fact that he continued to feel unwell, nauseated and was throwing up, his employer was informed by other co-workers for it, without nevertheless transferring Mr. V.T to the hospital but instead merely providing him with painkillers. Late at night, due to the perpetuation of his situation, the employer’s spouse transferred him to a private clinic in Pafos with the help of other migrants.

Two days later the employer called Mr. V.T’s  “agent” who had arrived at the employer’s residence in the accompaniment of her husband, Mr. Dinos Michailides ‘to take back’ the migrant workers from Vietnam as the employer seemed to no longer need them. It is noted that the employer, in collusion with the “agents”, forced migrants to sign a document to discontinue their employment (release paper) in a language in which they did not understand. In fact, one of the “witnesses” was no other than the ex interior minister, Mr. Dinos Michailides.

Immediately after the signing of the “release paper” Mr. V.T was transferred by the “agent” and he spouse, Mr. Dinos Michailides’ to the General Hospital of Pafos. On their way they attempted to convince him that ‘there was no reason to report the case to the police since they would not believe him anyway’. It is noted that Mr. V.T had attempted to report the case to the police from the beginning but due to the lack of knowledge of the Greek and English language he had failed to do so.

Following his departure from the hospital, he was transferred to the “agents’” residence where he was informed that he could rest until they find a new employer for him. The same day, Mr. V.T managed to go to KISA’s offices in Nicosia, with the help of his compatriot and without the “agents’” knowledge, where he was assisted to report the case to the police.

KISA is expressing its deep concerns since after the passing of 2 months since Mr. V.T’s complaint the case still remains under the initial stages of investigation. At the same time, we publicly denounce this new incident of exploitation which must unquestionably be investigated as whether it involved elements of abuse of power on the basis of the ex minister’s involvement.

In the light of all of the above KISA asks:

The relevant authorities to proceed to the taking of measures for the effective combating of migrants/ refugees’ exploitation rings and especially the role of self-appointed “private employment agencies”, as well as the involvement of personnel from the relevant government services.

The investigation of the involvement of the aforementioned “agent” in the handling of the incident in question, her general action in this field, as well as to whether Mr. Michailides’ position as an ex interior minister is being utilised in any way.