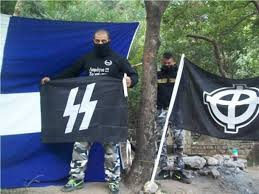 Under the pressure of part of the court proceedings that begin on the 20th April against their leaders indicted in Koridallos on one hand for the murders, acts of violence and other serious crimes and on the other hand because of the substantial differences in the Greek society and the political scenery of the country, the Neo-Nazi mobsters of Golden Dawn and its representatives of ELAM here in Cyprus have tried to present themselves, through the known Goebbels style tactics of this Neo-Nazi organization, as a political power that cares for the country and the society.

Unfortunately for them, the conditions have changed and the society no longer gets easily fooled concerning their real intentions and ideological origins. The society’s reaction and that of many organizations led, to the cancellation of the venue where their event would have taken place, which was initially given to them by Cleopatra Hotel. Finally, ELAM hosted on the 1st of April the event in another place that it secured by hiding its identity, as well as the reason they wanted to use it for. The event took place involving exclusively members of ELAM and the Golden Dawn and was not covered by any means of information. The only exception to the latter was made by journalist Pavlos Mylonas, who chose to invite three members of the Golden Dawn and one of ELAM and to dedicate them half an hour in a central informative show of TV channel MEGA. The purpose was for them to recover the lost ground by the reaction of the society and the mobilization of the antifascist organizations.

Throughout the duration of the aforementioned TV show, Pavlos Mylonas was trying to enforce the members of ELAM and Golden Dawn, instead of dealing with them in a critical and demeaning attitude. He gave them the chance to spread their Goebbels style propaganda, their racist hatred and their intolerance against migrants and refugees, against Islam and the antifascists powers with no contradictions. Repeatedly emphasizing the special appreciation that he himself has for the military and especially the Greek military, MEGA’s journalist has thoroughly neglected to mention the crimes for which they are responsible and accused of being natural and moral instigators, such as: the murder of Greek musician Pavlos Fyssas, the attempted murder of trade union members of PAME trade union, the murder of the migrant worker Loukman, the attacks and beatings of countless trade unionists, migrants, LGBTs (Lesbians, Gays, Bisexuals, Transexuals), Roma and whoever stood in their way with their democratic/ anti-racist/ antifascist action.

Pavlos Mylonas, instead of condemning these crimes, strongly supported the “right” of the mobsters of Golden Dawn and of ELAM, to express their neo-Nazi propaganda of intolerance. He supported that “only the people with their vote have the right to judge”, defying the fact that the worst dictator of history was judged and supported by the overwhelming majority of the German people, exactly through their vote. In fact, he described the people who through their antifascist action ask for the implementation of the law for prohibiting the dissemination of racist and hate speech, as “Stalinists” and “Fascists”.

Fascism is a very specific ideology, which ELAM and Golden Dawn express and embrace. The hate speech and the crimes that are motivated by racism and discrimination of any kind cannot be considered to constitute “freedom of speech”. The defense and the concession of a forum for public discourse to ELAM and the Golden Dawn constitute fomentation and promotion of fascism and its crimes.

As society and organizations, let us continue the fight against the criminal ideology and action of Golden Dawn and their construct ELAM.

Let’s all deny the provision of services and facilities of any kind to these two groups.

Let’s resist to fascism and let’s reclaim societies free from racism and any kind of discrimination.