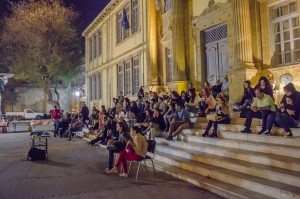 On Saturday, 02.05.2015, at 8:00pm, KISA together with  Drasy-Eylem and Ergatiki Dimokratia presented the documentary “Palikari: Louis Tikas and the Ludlow Massacre” at Faneromi Square in Nicosia. More than 70 persons joined the screening of the documentary that tackles labor relations in early 20th century America, through the story of the Greek migrant and trade union activist Louis Tikas.

The Ludlow Massacre and the murder of the Greek migrant and unionist Louis Tika is one of the most important moments of the US labor movement. The producer, Lamprini Thomas, and the director, Nikos Ventouras, sought the memories, the history, and the heritage of Louis Tika and Ludlow in Colorado. They interviewed historians and artists, some of them direct descendants of strikers, recording the evidences that contributed to the formation of the American labor movement through labor demands and a tragedy, the memory of which many tried to repress.

The story that Palikari recounts is important in our days, for Cyprus, Europe and the whole world. It highlights both the importance of labor movements at a time that rights, which had been obtained and were considered for granted, are now into question, as well as the urgent necessity for Cypriot and migrant workers to organize together in order to (re)claim their rights.

Mass evictions in Paphos could lead to upsurge in homelessness, NGO says
29 August 2020

MIGRANT support NGO Kisa has warned that the mass eviction of migrants [...]