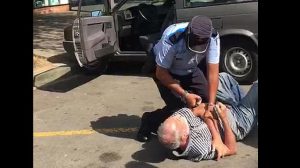 KISA condemns an incident of serious mistreatment, humiliating and degrading treatment by a police officer of a Turkish citizen, aged about 60, at the Ledra Palace check point, which took place on 31/8/2017. According to indisputable testimony of the complainant himself based on the marks on his body, but also evidenced by many other citizens who witnessed the incidence, the said person was cruelly mistreated by a member of the Police. The complainant, who lives with his family in Famagusta in the areas not under the control of the Government of the Republic, went through the Ledra Palace check point on a bicycle, without realising that he was liable to be stopped and checked as at that point in time nobody asked or stopped him for any checks, while other people passed by freely.

Immediately after crossing the check point, he was followed by a Police officer in a patrol car who instructed him to return and the complainant immediately complied with. At the Police post, the same policeman, for no reason or provocation whatsoever, started beating him with his hands. The complainant lost his balance and fell off his bike, after which the policeman started to kick him. The incident occurred in front of citizens watching and urging the policeman to stop. The policeman then took the complainant inside the station, where he continued the beating in front of another policeman who did nothing to stop him. After he «blew off steam”, the policeman initially poured water over the complainant and then something like cologne on his wounds, which resulted in even more excruciating pain.

KISA reported the mistreatment on the same day to the Independent Authority for the Investigation of Allegations and Complaints against the Police (AADIPA), while many citizens gave written and oral evidence on the incidence. The Police initially attempted, as per their usual practice in such cases, to accuse the complainant for, amongst others, causing real bodily harm against policemen, for resisting arrest and assault against a law enforcement agent.  KISA’s and the watching citizens’ immediate reports to AADIPA were instrumental in the Attorney General Office to refuse to allow the prosecution of the complainant. Instead, the Law Office ordered the appointment of a criminal investigation of the citizen’s complaints.

Although the complainant stated right from the beginning that he wished to go back to his family as soon as possible and to also cooperate with the authorities for the investigation of his complaint against the policeman, as from 1/9/2017 he is being detained on the administrative order of the Director of the Civil Registry and Migration Department. KISA condemns this act of the Director of the CRMD as illegal and also punitive as:

KISA also considers the authorities’ intention to deport the complainant to Turkey, probably via Greece, as imprudent and unnecessarily lengthy as they are aware that he lives in the areas not under the control of the Government of the Republic and could, therefore, arrange his departure and return to his family in cooperation with the UN, as it happened in other cases in the past.

KISA calls on the state competent authorities to: