Beating and racist violence against a recognised refugee by a member of ERU in broad daylight, in the centre of Nicosia! – 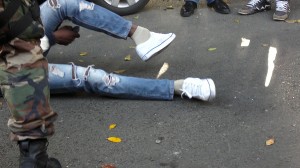 KISA – Action for Equality, Support, Antiracism denounces the beating and racist violence against a recognised refugee by a member of ERU – Emergency Response Unit of the police, in broad daylight day, in the middle of Nicosia, and calls for an immediate criminal investigation against him.

The African refugee asked the three policemen why among all the passers-by they chose to stop three Africans, without any suspicion or cause. The response of one of the three policemen was “This is Cyprus! If you don’t like it, you can go back to your country, where you can teach the police how to behave.” The African refugee, from Ivory Coast, who has been living legally in Cyprus for seven years, married to a Cypriot woman, with whom they have a child aged four, replied that “he had not received an answer to his question”, to which the policeman replied that “if he [the refugee] said anything else he would be arrested”. The African refugee then added that “he had not done anything to be arrested for” and insisted to ask for a reply to his question, considering the policeman’s action as part of the continuing racial profiling of the African community in Cyprus.

From that moment on, the policeman made use of unjustified violence. He first punched to the ground the African refugee, who had his leg broken and did not put up any resistance. Immediately afterwards, the policeman attempted to cuff and arrest him, pulling the injured African from his broken leg to the patrol car, causing more wounds and abrasions on the head, face and right hand. It is noted that the incident took place in broad daylight, in the heart of Nicosia, in front of tens of passers-by, some of whom took photos and videos of the beating and mistreatment of the African refugee by the ERU policeman. An ambulance arrived after this and took the African refugee to the Nicosia General Hospital, while two other patrol cars arrived at the scene and policemen dispersed passers-by. After the African refugee was taken to hospital, the police initially refused to receive any complaints about his beating by a member of ERU and actually accused him of giving false information and resistance to authority! After KISA’s intervention, the officer on duty at the Nicosia District Police Department issued instructions to receive the complaint of the injured refugee.

KISA calls for the immediate investigation of the incident by the Independent Authority for the Investigation of Allegations and Complaints against the Police and display of zero tolerance to racial profiling and police violence against migrants, refugees and other people under international protection.