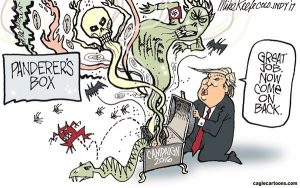 The results of the recent elections in Austria and Germany, and previously in France, are indicative of this rise of the far-right across Europe. However, a greater cause for concern lies in the influence of the far-right on other parties and politicians, as well as the resonance of its attitudes in society. Mainly – but not only – conservative parties and politicians are using far-right rhetoric (anti-migrant, nationalist, Islamophobic) in their attempt to keep their voters from voting for far-right parties and to maintain – or even gain – votes. in addition to being ineffective, this practice is also dangerous. Ineffective because, as the results show, the movement of voters towards the far-right cannot be checked, and the only element that is accelerated is its postponement. And dangerous because it leaves its mark on society, normalising and solidifying racism, nationalism, discrimination and hate, particularly against the most vulnerable social groups.

It is particularly telling that in Cyprus, in light of the coming elections, political forces, including that of the current President of the Republic of Cyprus, choose to turn towards a more nationalistic rhetoric and stance, especially with regard to the Cyprus problem, aiming to maintain or gain voters from the most extreme nationalist faction of society and their party.

Although the far-right neo-Nazi party ELAM seems to have recently restricted its bullying actions, the truth is that other organisations have taken over this type of action, carrying the banner for “militant” nationalism. It is worth mentioning, as a characteristic example, the attack by members of such a group against the executive director of KISA, last Monday evening, after an event in Limassol protesting the erection of a monument to Grivas. The attack ended when other people arrived on the scene, including the former mayor of Limassol.

At the same time, ELAM seems to have penetrated traditional pro-union with Greece  and Griva-supporting circles, including associations of EOKA fighters and football clubs that until today have operated  as pools of popular support and votes for the conservation  block. The recent majority decision in parliament in favour of the inclusion of the union referendum of 1950 in the school curriculum, as well as the majority decision of the city council of Limassol to grant a building permit to erect a monument to the leader of the terrorist organisation EOKA B, which is responsible for abolishing the Constitution and its tragic consequences, are characteristic examples of the new strategy and action of ELAM. Clearly, in Cyprus, anti-migrant rhetoric is no longer the only way to guarantee a vote; anti-Turkish and nationalist-pro union rhetoric also attract numbers.

Organisations and groups of people resisting such reactionary rhetoric and politics, like KISA, Unite Cyprus Now and others, are being targeted and have again been targeted as “traitors” and “anti-Greeks”. A characteristic example of this is the slander, harassment and even death threats that were made after the announcement of the Attorney General’s decision to criminally prosecute the police officer who, based on the report of the criminal investigator, seems to have abused his position during the arrest of a Turkish national at the Ledra Pallas checkpoint.

KISA points out the danger, not just regarding the rise of the far-right in the elections, but also regarding the influence of the far-right on political speech and social conscience. Now more than ever, it is necessary to stand up to far-right and neo-Nazi rhetoric with a progressive stance in favour of human rights for all, protecting and advocating for the rights of the most oppressed and socially vulnerable people, guided by the vision of free and progressive societies united by solidarity beyond borders.