Another attempt for criminalization fails 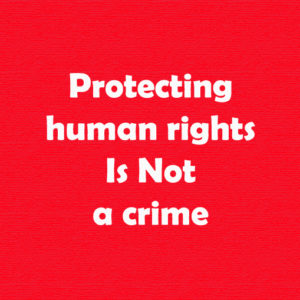 Via a court decision which was issued[i] on Thursday (02/09/16), the Nicosia District Court has acquitted and declared Executive Director of KISA, Mr. Polykarpou as not guilty in regards to a charge concerning an “attack” against a police-officer as well as “the cause of actual bodily harm”. The court reached this decision since the evidence produced by the prosecution “is not sufficient in order to establish a prima facie case against him …” Once again, the acquittal of KISA members confirms that the members of our organization are led to court during various instances based on unsubstantiated accusations in an effort to smear their reputation and credibility, as well as with the objective of labelling their activist actions and the action of KISA as criminal.

More specifically, on the morning of April 1st, 2013, the Executive Director of KISA, held a protest in relation to the fact that the Prison administration and the Nicosia Municipality only show their concern during April 1st in regards to the turmoil and pollution problems which are caused by the prisons in the area on a daily basis, since on that specific date several officials are expected to visit the prison grounds due to the celebrations of EOKA.

On that specific day, the Sergeant of the Central Prisons Mr.G.K., in the presence of both police-officers and prison staff, attacked Mr.Polykarpou both verbally and physically. A few hours after the incident, when Mr.G.K., was informed about the complaints which were filed against him by Mr. Polykarpou, he followed the same tactic that many police-officers seem to favour when they are involved in cases of civil abuse. Thus, he also filed a complaint against the complainant citizen, accusing him of “attacking” and causing actual bodily harm against a police officer.

In its decision, the court explained that the complainant’s claim is “objectively unfounded,” since G.K.’s version of the events “was contradicted by all the rest of the witnesses who were called by the prosecution.” Mr. G.K. stated inter alia at court that there were scratches on his neck which could be detected under the collar of his shirt and that these marks were caused by Mr. Polykarpou, without however causing any damage or abnormality to the shirt’s collar. This fact suggests that G.K. probably caused these scratches on his neck by himself in order to incriminate the Executive Director of KISA.

Indeed in its decision, the court poses the question why the police decided to bring the case before the court more than a year after the incident, providing eye-witness testimonials which as the decision mentions “in no way supported the complainant’s version of the events but rather, they categorically denied it”. The only answer which can be provided to the court’s questions is the fact that there is a constant attempt by the authorities to criminalize the action of KISA and its members, and especially by the police. Besides in the past, there have been several other unsuccessful attempts to criminalize the action of KISA.[ii]

We are particularly concerned with the fact that the prosecution tried to exploit Mr. G.K.’s complaint in order to suggest to Mr.Polykarpou to withdraw his complaint against G.K. in exchange for G.K.  withdrawing the charges against him, which of course Mr. Polykarpou refused to do so. Unfortunately, it is precisely this tactic which promotes and encourages many police-officers to file false accusations against citizens that are abused, using these accusations as leverage to drop any charges against them. In fact, many times and for obvious reasons, a case that involves a police-officer’s “complaints” is immediately prepared and filed at court while citizens’ complaints remain under continued investigation.

We also wonder how it is possible that although both the police and the respective Ministry are aware of the fact that G.K. was sentenced for a criminal offense against a citizen while he was on duty (defamation against Mr. Polykarpou), not only there were no disciplinary sanctions filed against him but no disciplinary investigation has even been conducted in regards to what happened. It is noted that G.K. was acquitted of the charges concerning the cause of actual bodily harm against Mr. Polykarpou by the consent of the prosecution authority and without even informing the complainant.

Based on all of the above, KISA calls on the leadership of the police and the Attorney General to take the necessary measures to combat the practice which has been observed: Members of the police who are accused of violating citizens’ rights, provide false testimonies and file scheming criminal cases against the complainant citizens, turning the victim into the abuser and the abuser into the victim via this method.

At the same time, we call upon the Prisons’ Administration as well as the Ministry of Justice to investigate any committing disciplinary offenses which have been conducted by the aforementioned police-officer, both in regards to an attack against a citizen as well as in regards to the possible false testimony which he provided to the police concerning the events.

Finally, we would like to state that no effort aiming towards the criminalization of KISA and its members can silence our organization. Since the day of its foundation until today, KISA remains committed in defending human rights and fighting with all available means for the equality of all people as well as for the struggle against racism and all forms of discrimination.

[ii]You can see more info about the case of ‘’’ events at Foinikoudes” in 2011 at the link http://goo.gl/AR3hn6 and for another case of criminalisation of 2009 at the link: http://goo.gl/eSKpbD