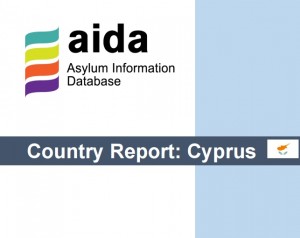 The updated AIDA report on Cyprus details reforms in the asylum procedure taking effect in July 2015. A newly established Administrative Court has taken over as the first instance judicial review authority for asylum decisions. Therefore asylum seekers lodging applications after 20 July 2015 will no longer appeal negative decisions before the Refugee Reviewing Authority (RRA), an administrative body, but the Administrative Court, which is competent to examine decisions on both points of fact and law. The RRA will continue to examine appeal and will cease operations as soon as it completes its backlog of cases.

Moreover, the report written by Future Worlds Center discusses an age assessment procedure initiated in May 2015 for unaccompanied children, which depends solely on intrusive medical tests with a significant margin of error and which has found the vast majority of all individuals tested to be between 18 -19. Children have been forcibly evicted from the shelters with many disappearing. In addition, the decision determining the age of the child is not provided in writing and there is no procedure to challenge the authorities’ decision.

Finally, one year on, the newly adopted policy on detention of asylum seekers, according to which the only asylum seekers detained are those who submit an application after they have been arrested and detained, is still in place. Based on monitoring throughout the year, the numbers of asylum seekers in detention at any time are at an average of 20 persons. The new policy stipulates that the applications of detained asylum seekers undergo a fast-track examination whereby the Asylum Service issues a decision within 30 days, and the RRA rules on appeals within 15 days. However, the aforementioned deadlines are not always followed and intervention is often necessary to highlight that the timeframe has elapsed and the detained asylum seeker must be released.