Abuse of power is leading detained migrants to desperate acts 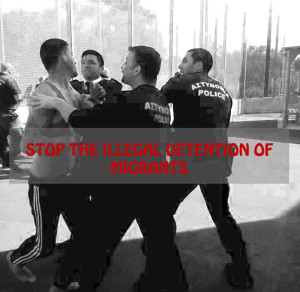 • Their request for immediate release will be examined immediately and that they will receive an answer within ten days.
• Their cases would be handled personally by the Minister of Interior himself with good will in order to make possible their release.

The fourth detainee (A.P) continues his protest since he considers that the CRMD will not keep their promises. Up to now, CRMD has defaulted twice its commitments before the Supreme Court regarding the cancellation of the detention and deportation orders and the immediate release of the concerned person (see the relevant photos). Each additional day of arbitrary detention of A.P in Menoyia deteriorates his mental health, that has been shaken to the extent in which it is a serious risk to his life. One must note that A.P is a refugee who came to Cyprus 20 years ago (1998 at the british bases). He was sentenced for a crime and served time in prison. When he finished his sentence two years ago, instead of being released he was transferred to the Detention without any court order. Since then, he is under indefinite detention in Menoyia.

KISA calls on the authorities to keep their promises and proceed to the immediate release of the above persons as well as all the others illegally detained persons in Menoyia.

KISA considers that the turmoil caused in the Detention Center during the past few days is mainly due to the intransigent and arbitrary policy that is followed by the Acting Director of CRMD regarding the inconsiderate issuing of detention and deportation orders. It is important to note that this behaviour contradicts the spirit of the European Return Directive (2008/115/EC) and the national legislation. In a report in which the Commissioner for Human Rights of the Council of Europe published last Thursday (31/03/2016),it is stated that Cyprus must end its imprudent policy of detaining migrants.

This morning (06/04/16), two officers from the Civil Registry and Migration Department (CRMD) visited Menoyia in order to handle the case of the four detainees that are on the roof of the Detention Centre since Monday. The detainees have been protesting against their arbitrary and prolonged detention. However, the representatives of CRMD, rather than choosing to deal with the substance of the detainee’s demands by informing them when they will be released, have attempted to persuade them to stop their protest with vague promises.

Detainees are threatening to commit suicide if they are not released while they have caused injuries in their bodies as a sign of their willingness to hurt themselves if the authorities do not respond to their demands.

According to all the information we have obtained so far, we consider that all protesting detainees should be released immediately from Menoyia since:

– S.N is an asylum seeker who was arrested when he voluntarily visited the Aliens and Immigration Unit (AIU) in order to inform them about his change of address. It noted that he was released from Menoyia approximately two weeks ago (he was arrested in mid-December 2015), since his application for asylum to the Refugee Reviewing Authority was pending.

– W.K is a refugee who came to Cyprus 2010 as an unaccompanied minor from Afghanistan. The Competent Authorities were waiting for him to reach adulthood in order to reject his application for asylum.

– A.P is a refugee who came to Cyprus 20 years ago (1998 at the british bases). He was sentenced for a crime and served time in prison. When he finished his sentence two years ago, instead of being released he was transfered to the Dedention Camp without any court order. He is under indefinite detention without any prospect to be removed from the country.

– T.T is a migrant who was brutally beaten up by police officers of the Aliens and Immigration Service during his deportation procedure. Given that his complaint is pending before the Authority for Investigating Complaints against the Police, his detention in Menoyia can be considered as an indirect blackmail to withdrawal of his complaints.

KISA condemns in the most emphatic manner the use of police violence against individuals who are currently detained at the Detention Center for Undocumented Migrants in Menoyia. At the same time, we once again denounce the unjustified and illegal practice of the Civil Registry and Migration Department (CRMD) which continues to insist on its irrational policy of detaining migrants. Furthermore, we denounce CYBC station for its misleading portrayal of the events which have taken place, since through its one-sided mode of representation, it has essentially functioned as an apologist for police brutality.

More specifically, as of Monday morning (04/042016), three detained migrants have positioned themselves on the roof of the Menoyia Detention Center as a mode of protest for their unlawful and lengthy detention while threatening to commit suicide if they are not released. At the same time, many of the other detainees refuse to enter their cells in solidarity to the justifiable demands of their protesting fellow detainees. Yesterday afternoon, a large number of police force visited the Center, including members of the Police Rapid Response Unit (MMAD). According to what KISA has been informed, the police officers proceeded with the physical abuse and violent arrest of detainees who were expressing their solidarity to the aforementioned protesters[i]. It is noted that during these episodes, the video surveillance system had been turned off by the Center’s Administration, evidently in order to eliminate any evidence on the manner with which the police dealt with the situation.

The case of one of the three protesters exemplifies CRMD’s irrational and irregular policy concerning the detention of migrants in Menoyia, a policy which in essence constitutes the foundation for the problems which are generated at the Center. Mr. S.N. was released from Menoyia approximately two weeks ago (he was arrested in mid-December 2015), since his application for asylum to the Refugee Reviewing Authority was pending and he was therefore considered to be an asylum seeker. However, one week after his release (24/03/2016), Mr. S.N. was arrested again when he voluntarily visited the Aliens and Immigration Unit (AIU) in order to inform them about his change of address. AIU proceeded with his arrest and detention on the grounds that his action was dismissed on 21/03/2016 and they subsequently issued orders for his detention and deportation.

First of all, the arrest of Mr. S.N. is unacceptable and unlawful since, in accordance with the law, he is considered an asylum seeker until the hearing of his appeal at court against the administrative decision rejecting his application. Furthermore, the possible deportation of this individual violates international, European as well as national law since it will involve the refoulement of an asylum seeker. At the same time, the decision to issue legal orders for his detention and deportation will cost the state a few thousand Euros since, apart from the administrative costs for his detention, the state will have to bear the costs of his transportation to and from the court for submission of appeals, and probably the expenses for the entire judicial proceedings.

Finally, we denounce the CYBC station for its one-sided portrayal of the events which unfolded in Menoyia, as per the news report which was broadcast during the station’s main news bulletin (04/04/15). By repeatedly violating the rules of journalistic code of ethics, CYBC chose to broadcast only the police’s version of events to the viewers, essentially portraying the victims of police violence as individuals who “rioted and struck police officers of the district police station who had rushed to the Center in order to impose order”. It needs to be noted that CYBC did not consider it necessary to refer to the report of the Commissioner for Human Rights of the Council of Europe[ii] which was published last Thursday (31/03/2016), and where it is stated among other things, that Cyprus must end its imprudent policy of detaining migrants.

In view of the above, KISA demands:

[i] The video where police officers are exercising violence against migrants can be viewed at: https:/youtu.be/HeST-k6BtuA