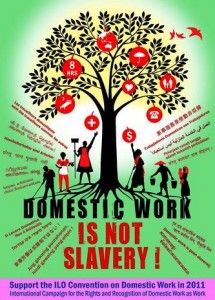 KISA – Action for Equality, Support, Antiracism is accusing a Senior Lawyer of the Law Office of the Republic of Cyprus and the Director of Civil Registry and Migration for abuse of power over the illegal deportation of a migrant domestic worker. The allegation against the two government officials is that they punished the migrant worker with deportation because she had requested to change employer, hoping to leave her initial employer who is also a Senior Lawyer of the Law Office.  KISA is also accusing the Ministry of Interior that not only did not examine the worker’s complaint of abuse of power, but in contrast it moved ahead with deporting the migrant domestic worker, thus violating her rights for a second time.

More specifically, Ms. G, a migrant domestic worker, came to Cyprus three years ago on a work visa to work at the household of the Senior Lawyer of the Law Office. She was deported on Saturday evening, 11 January 2014. Her deportation was carried out after a request by her employer, despite the fact that KISA informed the authorities that the arrest warrant and deportation order were issued illegally.

On 9 January 2014, police officers of the Aliens and Immigration Service (AIS) in Nicosia arrested Ms. G at the home of her employer. The employer, who is a Senior Lawyer in the Law Office of the Republic of Cyprus, has confirmed that the migrant worker had been working at her home until her arrest. She has also confirmed to KISA that she herself requested the work visa be revoked, while at the same time she had notified the officers of the AIS, who went and arrested Ms. G outside her residence. Based on her own account, she did this out of spite because the migrant domestic worker had been asking for a “release”, so that she could change employer. When we asked her why would she not give the release papers to Ms. G, the employer replied this way: “I brought her to Cyprus, I helped her settle in, and now I will let her go to another employer? No, if she wants to leave me, then she can go back to her country. That’s fair”.

Ms. G had been asking her employer to allow her to change employer, following the legal procedure that requires a domestic employee to get a “paper release” from the former employer in advance. KISA has repeatedly said that this method amounts to bondage. According to friends of Ms. G, based on their conversations with KISA, the migrant domestic worker could not stand her working conditions anymore, as she was forced to work longer hours and her employers abused her verbally, tormented her psychologically, screaming and threatening her often with deportation.

KISA sent a letter to the Ministry of Interior before the deportation took place, asking among other things the reasons for canceling the migrant worker’s visa, noting there was clear proof she was still working at the employer’s home, since she got arrested there which was also confirmed by her employer. In lieu of a response, Ms. G was deported the next day. KISA is concerned about a possible connection between the power of the position of the Senior Lawyer of the Law Office and the immediate steps in revoking the visa, as well as issuing a warrant for arrest and deportation of Ms. G. It must be noted that deportation may not be ordered for someone who stays legally in the Republic of Cyprus, unless he or she is deemed dangerous for state security or detrimental to the public interest or if there is a breach of moral code. Ms. G’s stay and work permit had been totally legal, as admitted by her employer. Furthermore, she never left her employer, so there was no basis to be deemed violator of her visa terms at the time of the arrest at her legal workplace.

KISA considers the immediate deportation of Ms. G as illegal and an abuse of power, as she did not get a chance to file an appeal according to the European law. KISA calls on the authorities, including the Attorney General of the Republic of Cyprus, to investigate this case without delay. Finally, KISA emphasizes the need for radical change in domestic worker migration policy, which is made up almost entirely of migrant women. KISA also reminds that the Republic of Cyprus repeatedly made a commitment to revise its policy on migrant domestic workers, in order to have an appropriate institutional framework safeguarding employee rights, but also eliminating discrimination and violence against these women. [[1]]

United Nations – Convention on the Elimination of All Forms of Discrimination against Women, “CEDAW/C/CYP/CO/6-7 – Distr.: General, 25 March 2013, Original: English. Concluding observations on the combined sixth and seventh periodic reports of Cyprus, adopted by the Committee at its fifty-fourth session (11 February–1 March 2013)”. Access via: http://daccess-dds-ny.un.org/doc/UNDOC/GEN/G13/421/75/PDF/G1342175.pdf?OpenElement

United Nations – International Convention on the Elimination of All Forms of Racial Discrimination, “CERD/C/CYP/CO/17-22 – Distr.: General, 23 September 2013, Original: English. Concluding observations on the seventeenth to twenty-second periodic reports of Cyprus, adopted by the Committee at its eighty-third session (12-30 August 2013)”.Access via: http://tbinternet.ohchr.org/_layouts/treatybodyexternal/Download.aspx?symbolno=CERD%2fC%2fCYP%2fCO%2f17-22&Lang=en