9 November, International Day Against Fascism and Antisemitism: Day of Remembrance and Resistance! 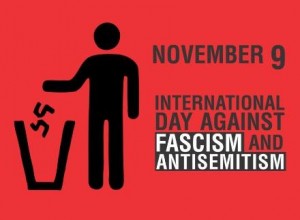 On 9 November 1938, the day of the “Kristallnacht” pogrom, the road was paved for the extermination of the Jewish people in Europe by the nazi and fascist regimes in Europe. [1] Since then, this day is marked  as the symbolic beginning of the Holocaust, the policy of the systematic extermination of millions of people, which reminds us that such terrible atrocities did not start with massive deportations and concentration camps but were planned and developed step by step. Nazi propaganda, prosecutions and other acts of hate against Jews, as well as the racist laws depriving Jewish people of their rights, were the first steps that paved the way for nazism and fascism to eventually culminated in pogroms and genocides. [2]

In view of the ever rising neo-nazi, fascist and racist ideologies and tendencies in the whole of Europe, history reminds us that it tends to be repeated when we do not learn from it, while at the same time we should also remember that the Holocaust took place with the “spontaneous” support of the overwhelming majority of society or at least with its silent acceptance.

Today, right-wing extremism, neo-nazism and neo-fascism are the increasing forces in the entire European continent. Hate discourse is reflected and promoted almost everywhere, from mass media to social media, by politicians and governments, while hate crimes are becoming a daily reality. At the same time, extreme right-wing and clearly neo-nazi parties are elected and represented on local government councils and national parliaments, while xenophobic propaganda is legitimated in our societies, with the pretext of “combating illegal migration”, “borders control” and “protection of native citizens”. Hatred all throughout Europe is becoming a deadly daily constant. It appears in many faces – institutional discrimination, including welfare chauvinism, nationalism and neofascism-neonazism, xenophobia and racism, islamophobia and antisemitism, sexism and homophobia – but it always leads to the same poisonous and dangerous ideas and perceptions everywhere. This hate not only leads towards violence, discrimination and exclusion, but it is a direct threat to democracy and peace as well.

“United for Intercultural Action”, an activist network with more than 560 members in all European countries, fighting against nationalism, racism and fascism, and providing  support and solidarity to migrants and refugees in Europe – established the 9th of November as the “International Day Against Fascism and Antisemitism”. [3] KISA – Action for Equality, Support, Antiracism, as a member of “United for Intercultural Action”, is marking this Day and commits to  continuing and intensifying  its action for combating discrimination, xenophobia,  racism and fascism, for the support and protection of diversity and multiculturalism, for the defence  and promotion  of human rights of all human beings.

Finally, KISA has set the following two initiatives among its top priorities:

1. The operation of a mechanism for recording and reporting incidents of racism, racist violence and discrimination, under the project  «RADIAlert – Racism and Discrimination Alert», which is funded by the Open Society Foundations [4], and

2. The promotion, planning and undertaking of joint strategic action for combating nationalism, xenophobia, racism and fascism, in cooperation with all democratic, progressive and radical actors of civil society in Cyprus.

[1]         On 9 of November 1938, the Nazi regime in Germany started a pogrom against Jewish people. The special forces of the German army and paramilitaries’ groups of the Nazi party destroyed altogether more than 8000 homes and shops, set synagogues on fire and burnt down cultural centres, while they also imprisoned and killed Jews all across the country. Pieces of broken windows of the buildings covering the streets in many German cities gave rise to the name “Kristallnacht”, which freely translated means the “Night of Broken Glass”.

The “Kristallnacht” pogrom is seen as the symbolic beginning of the systematic eradication of Jewish people, which although it had started with the discrimination and exclusion of the German Jews since 1933, eventually led to the genocide of 6 millions Jewish people and 5,5 million “enemies of the German state”: members of religious and ethnic minorities, mostly Roma and Sinti, people with disabilities and health problems, homosexuals and lesbians, political “offenders” and mostly socialists, communists and anarchists, as well as migrants and refugees, like the prosecuted Spanish Republicans of the Spanish Civil War.

[2]         As happened for example with the “Nuremberg Laws” (“Nürnberger Gesetze”), which, among other things, stripped German Jews of their citizenship and their rights.