Trafficking in Human Beings (THB) is defined by international and European legislation, in particular the United Nations Convention against Transnational Organised Crimes and its Protocol to Prevent, Suppress and Punish Trafficking in Persons (15 December 2000), the Council of Europe Convention against THB (3 May 2005) and the European Directive 2011/36/EU on on preventing and combating trafficking in human beings and protecting its victims (5 April 2011).

Trafficking in persons has three constituent elements: action (what is done) – means (how it is done) and exploitative purpose (why it is done):

In order to improve support provided to victims of THB in the asylum process, both as regards to the procedure and reception conditions, several activities are being implemented :

The project is based on a common observation from the partnership members that the asylum-THB nexus is raising growing concerns at EU, national and local levels, in particular in relation to identification of victims of trafficking in the asylum procedure, but much remains to be done to ensure appropriate protection to these persons.

Victims of THB have been included as a category of vulnerable persons in the revised Reception Directive of June 2013 that came into force on 21 July 2015. Ireland and the United Kingdom are not bounded to the latest but still need to have practices in line with EU human rights standards. However, in most countries, once victims of THB are identified in the asylum procedure there is no coordinated approach to their accompaniment and their specific needs are generally poorly addressed. Therefore, the main issue is to allow victims of trafficking to benefit from an appropriate protection taking into account their very specific vulnerability. Considering the scale of the phenomenon, few victims of THB applying for asylum are granted refugee status or subsidiary protection at first instance as they have enormous difficulties expressing their protection needs: they are often under influence and threatened in the country they seek asylum in, lack awareness on their rights both as asylum seekers and victims of THB and have been through traumatic experiences.

The British Red Cross Society (BRCS) is the largest provider of non-contracted asylum support in the UK which covers destitution, orientation and one to one psychosocial casework. They are currently supporting trafficked people emotionally at rest centres after anti-trafficking raids and through referring them to the right agencies. They are increasing their capacity to respond to trafficking and are attending regional and national Anti-Trafficking Networks, and co-chairing the European Red Cross Red Crescent Anti-Trafficking Network. The Red Cross has developed strong relationships with key stakeholders and as such this application has been fully endorsed by the newly appointed Anti-Slavery Commissioner, Kevin Hyland, UNHCR and the Human Trafficking Foundation. This will put them in a strong position to influence change.

Churches’ Commission for Migrants in Europe (CCME) will contribute its wide network of contacts among refugee supporting organisations and anti-trafficking NGOs (CCME is co-chair of the NGO platform on asylum and migration and member of the NGO group of anti trafficking NGOs). CCME will also use its network with EU institutions for dissemination of results. As an organization specialized on International Protection, CEAR participates mainly on asylum procedures aspects related to THB but collaborates hand in hand with specific accommodation facilities for THB victims in Spain. CEAR is also member of the Spanish Network Against Human Trafficking, which gathers national and international civil society organizations in demanding a comprehensive law against trafficking to be developed from a human rights perspective requesting that Spain fulfills its responsibility to protect the victims, including their right to asylum.

The Immigrant Council of Ireland (ICI) has been active in the area of human trafficking since 2007. This work stems from their priority mission to support migrant groups at risk. Over the years ICI has developed a significant expertise in supporting migrant women and children who experience domestic violence, stateless migrants, unaccompanied minors, migrant women who are victims of trafficking and those vulnerable in the sex industry. ICI support to trafficked victims primarily consists of providing comprehensive legal aid, which often includes applications for international protection alongside support in the criminal investigations and any other legal matters arising in the context of the client’s situation – status allowing access to services, temporary and long-term protections, threats to family members, compensation, non-prosecution and others. The organization is presently leading a transnational project on Legal provision of victims of trafficking with EC funding (Early Legal intervention for victims of trafficking). Of particular concern for ICI is the situation with vulnerable asylum seeking victims of trafficking. The organization has been awarded grant by UN.GIFT (Global Initiative to Fight Human Trafficking) to study their situation, and the resulting report “Asylum Seeking Victims of Trafficking: Legal and Practical Challenges” (available at http://www.immigrantcouncil.ie/index.php/research-publications/publications/523-asylum-seeking-victims-of-human-trafficking-in-ireland ) has been widely studies and referred to. Presently, ICI represents a number of cases pertaining to vulnerable trafficked women seeking international protection which involves liaison with the Office of the Refugee Applications Commissioner, the Refugee Appeals Tribunal, the police authorities investigating human trafficking and the national coordination office at the Dept of Justice.

The Italian Red Cross (ItRC), thanks to its experience all along the migratory path, from the assistance at disembarkment to the social inclusion activities in asylum seekers’ reception centres and outside, may intercept several different needs expressed by migrant people, in particular by people victim of trafficking. By the way, because of its activity for the Praesidium project, which includes the monitoring of the asylum seekers’ reception centres in Italy, the ItRC has the possibility to share the results of the project among a wide net of stakeholders.

KISA  – The provision of information, support and mediation services through its Migrant and Refugee Centre is a fundamental and integral part of KISA mission, vision and daily action for safeguarding, promoting and advocating for the rights of migrants, refugees and asylum seekers, including victims of trafficking. In addition, KISA has over the years initiated and participated in many actions in the areas of trafficking and asylum, including awareness-raising and campaigns, social intervention in the form of reports to international and European bodies and agencies, position papers and recommendations to the competent authorities, as well as projects, including the following: “Bicommunal Action Against Trafficking in Human Beings”, co-funded by the US Embassy in Nicosia; “Integrated approach for Prevention of Labour Exploitation in Origin and Destination Countries”, co- funded by the Prevention of and Fight against Crime Programme 2009 of the EC, “The Europeanisation of national asylum and alien law in Cyprus, Malta, Italy and Spain: Detentions and detention centres for foreigners vs the Return Directive”, co-funded by EACEA under the “Europe for Citizens” Programme, “HUMA NETWORK- Health for Undocumented Migrants and Asylum seekers’, and “Exploring new forms of asylum procedures”, co-funded by the European Refugee Fund (Community Actions 2009) of the EC. 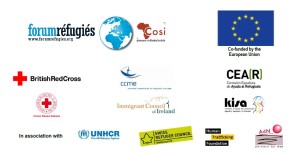