I THOUGHT I WAS APPLYING AS A CARE GIVER 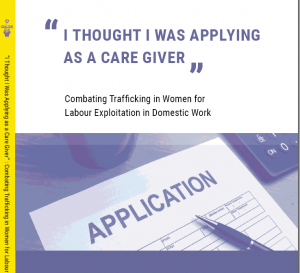 In recent years the issues of gender and migration have received more attention from scholars, researchers and policymakers in different national contexts as well as at the EU level. Despite there being acknowledgment that gender matters, the experience of migrant domestic workers as possible victims of trafficking in human beings for labour exploitation has remained unexplored. Migrant domestic workers are left out of most policy framework relating to immigrant integration, violence against migrants, trafficking in human beings (THB), or exploitation, and therefore they tend to be invisible at all levels. However, female migrant domestic workers are visible agents within the destination countries since current economies in Europe are also built around them. EU Mediterranean countries such as Spain, Greece and Cyprus have become destination countries for many female migrant domestic workers, while Lithuana is a country from which domestic workers originate. It is evident from previous research that many are victims of exploitation. OSCE’s Guide on Gender-Sensitive Labour Migration Policies notes that more women are migrating and the demand for workers in female dominated sectors, such as domestic work, is ever-increasing. Research shows that domestic workers play a crucial role in society but at the same time, due to the isolated and unregulated setting of their work, they are especially vulnerable to abuse, violence and exploitation. Migrant domestic workers mostly live in their employer’s house and many, according to studies by the International Labour Organization, report physical, psychological, sexual abuse, and exploitative work conditions. They are often overworked, underpaid, have their personal documents confiscated, are restricted in their freedom of movement, and have their pay withheld in order to pay off debts related to their recruitment and transportation. Such exploitation is under reported, and authorities do not necessarily recognize these situations to be cases of trafficking. However, trafficking in women may occur if the employee has been deceived, or if her dependent status and vulnerability has been abused in order
to subject her to exploitation. Furthermore, the recent EU directive on THB (2011/36/EU) recognizes the gender dimension and it encourages Member States to be more aware of the less investigated forms of THB such as labour exploitation. The new strategy on THB (The EU Strategy towards the Eradication of Trafficking in Human Beings 2012–2016) is a critical tool in assisting the Member States to implement the Directive, and both documents pay special attention to THB for labour exploitation. read the full report here