75 million from the EC into a bottomless pit 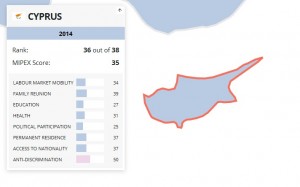 The European Commission announced on Monday, 10 August, that Cyprus will receive €74.9 million through the Asylum Immigration and Integration Fund (AMIF) and Internal Security fund (ISF). In particular, the financial contribution to Cyprus under the AMIF will amount to € 32,308,677. Certainly, the European funding in itself is good news. However, the management of the European funds granted to Cyprus for the 2007-2013 programming period raises questions as to whether the available funds for the 2014-2020 period will be used in a way that will improve the integration of migrants into Cypriot society * while making the asylum system fairer and more efficient.

The bulk of the EU funding for 2007-2013, which the authorities had at their disposal to finance the improvement of the asylum infrastructure, was allocated to the asylum authorities (Asylum Service and Refugee Reviewing Authority) for the creation and maintenance of the Reception Centre for Asylum Seekers in Kofinou (only for maintenance have been given € 6 million out of the total € 10 million of the refuge Fund) . However, this project does not in any way serve the refugees. In practice, the remote location selected for its construction together with the living conditions inside the centre not only fail to upgrade the asylum infrastructure, but also hamper the process for integrating refugees into Cypriot society. In practice, the “project” has been developed by the authorities not to improve the asylum system, but to deter potential beneficiaries of international protection from choosing Cyprus as their destination. Simultaneously, it is being used by the authorities as a mechanism to deprive them of their right to material reception conditions, since the refusal by asylum seekers to settle in the centre automatically leads to the termination of the provision of material reception conditions.

Instead of constructing the costly facility in Kofinou, which based on the results in no way improves the asylum infrastructure, it would have been better to use the available EU funds to create local decentralised facilities, as proposed by KISA, which would enhance and accelerate the process of integrating refugees into the local communities. The fact that the majority of refugees are unemployed and meet with institutional racism on a daily basis, and that most of them simply want to obtain travel documents to leave the country, demonstrates the complete failure of the official policies for integrating these people.

Regarding the integration into society of the second group of third country nationals, the migrants, the migration model adopted by Cyprus makes their integration extremely difficult. The limited period of their residence in the country (short term residence permit) in combination with specific sectors of employment that they can work due to their labour permits (agriculture, domestic work), does not create the conditions neither provide any incentive for migrants to integrate into society.

Further, during the drafting of the operational programmes under the previous programming period (2007-2013) and the current period (2014-2020), there was a lack of consultation by the competent authorities with refugee and migrant organisations and with Non-Governmental Organisations (NGOs) that truly understand the needs of these groups. This combined with the indirect or even direct exclusion of NGOs from applying for funding, lead to the design and implementation of projects that do not meet the objective of effective integration and improvement of the asylum infrastructure.

KISA considers that for the strengthening of the process of migrants’ integration and the improvement of the asylum system, Cypriot state, must first of all change the current migration model and contribute towards combating the racism and discrimination which prevail in Cypriot society. At the same time, the involvement of NGOs that understand the needs of these groups, as well as the direct involvement of the migrants and refugees themselves in the design and implementation of projects under the Solidarity Funds will contribute to strengthening the integration processes. Otherwise, we consider that the current programming period (2014-2020) will also end without any positive outcome in terms of the integration of migrants and beneficiaries of international protection and their equal participation in society.

*According to the Migrant Integration Policy Index, Cyprus is in the penultimate place out of 38 countries regarding migrant integration issues.