Husband of a Cypriot of Turkish-Cypriot origin, 35 years in Cyprus and father of two children in detention for deportation! 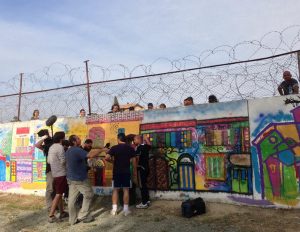 Yet another case that demonstrates the delirium caused by the aggressive implementation of measures which the Cypriot authorities insist on calling “migration policy” – but have nothing in common with migration law and human rights law – is added to the record of human rights’ violations , the facts of which causeindignation and surprise to the very least.

For the past month approximately, Mr L.A, who is Turkish Cypriot of Syrian origin, is being detained at the Detention Center for Undocumented Migrants at Mennogeia with the intention of being deported while at the same time no one is in a position to identify where he would be deported to, since his only recognised citizenship is Syrian and the country that has been his permanent residence for the past 34 years is Cyprus. As he himself remarks: “I don’t want to go anywhere, I want to go to Famagusta where my family is, home is just some minutes from here!“

In 1984, Mr L.A., who was 18 at the time, having finished high school in Syria, came to study at Famagusta, where he met his Cypriot wife. A few years later, they got married and had two children. In 1993, Mr L.A. was registered as a citizen of the TRNC based on his family ties.

When the checkpoints opened in 2004, Mr L.A. informed the migration authorities of the Republic that he is the husband of a Cypriot citizen, providing them with the relevant documents and credentials for the electronic database. Since then, for the past 14 years, he has travelled to all throughout the territories of Cyprus and abroad under the auspices of the Cypriot authorities, travelling outside of Cyprus through the entry points of the Republic, including Larnaca Airport, without any trouble. For example, in August 2017, he travelled to France via Larnaca Airport. Furthermore, the Ministry of Transport, Communications and Works of the Republic of Cyprus has issued him a temporary driving license, with which he could travel by his own car in the areas under the control of the RoC.

In light of the particularly restrictive possibilities for travel outside of Cyprus, being in the possession of travel documents (passport, ID) of the “Turkish Republic of Northern Cyprus” and a Syrian passport, documents which are either not recognised by other countries or make travel impossible, since,  due to  the war in Syria, no state issues visas of entry to Syrians, in 2014, Mr L.A. travelled to Germany where his brother lives as a recognised refugee, and soon secured refugee status for himself, along with refugee travel documents and a permit to remain in Germany.

Subsequently, Mr L.A. returned and lived with his family in Cyprus, travelling to Germany from time to time to maintain his right to remain as a refugee in the country in question. When he last attempted to travel to Germany via Larnaca Airport on the 30/07/2018, he was not permitted to travel because his German residence permit had expired and he was arrested and held in custody based on detention and deportation orders that the Civil Registry and Migration Department issued on the same day “due to unauthorised residence”!

While all European and international conventions for human rights repeatedly direct the attention of states to the importance of the strict and clear legal and procedural guarantees that must be abided in every decision regarding detention and deportation, the Republic of Cyprus chose to detain a Syrian citizen at Mennogeia for deportation purposes, while he is the husband of a Cypriot citizen and has been a permanent resident of Cyprus for years, has been able to move freely for decades across the entire area of the Republic under the auspices of the authorities, as he holds – among many other things – a valid “driving license… for the unoccupied territories of the Republic of Cyprus”, just a few minutes away from his home and without there being the slightest prospect of his deportation.

KISA reports the illegal detention of Mr L.A. and the violation of his rights and urges the competent authorities to release him immediately so he may return to his home and family.

We highlight that such grotesque situations would not occur if the Republic of Cyprus had impartially and consistently implemented policies and practices that unrestrainedly respect the right to naturalisation for members of the family of Cypriot citizens who belong to the Turkish Cypriot community.